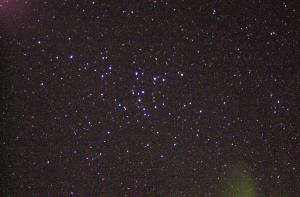 Stars of the Coma star cluster shine brightly outside the International Space Station in this shot by astronaut Don Pettit. Astronomers have discovered about 60 members of the cluster, which also is known as Melotte 111, and are still looking for more. The cluster is about 280 light-years away, in the constellation Coma Berenices, but is so spread out that it's difficult to confirm which stars belong to it. [NASA/Donald Pettit]

Astronomers love star clusters. All the stars in a cluster were born at the same time, from the same cloud of gas and dust. So any differences in the stars are the result of their evolution, which is a result of their mass. That makes it easier to learn what’s going on inside the stars.

One problem, though, is identifying which stars belong to a cluster. It takes detailed measurements of motion and brightness to distinguish cluster members from stars that just happen to line up in the same direction.

An example is Melotte 111, in Coma Berenices. The constellation is high in the east at nightfall. Under dark skies, the cluster is a good target for binoculars or a small telescope.

So despite decades of study, astronomers are still locking down the census of stars in Melotte 111. A study a few years ago confirmed eight small, faint members — the first of their kind known to belong to the cluster. And another study found that about a quarter of the stars in the cluster are binaries or multiple-star systems.

These discoveries bring the total number of stars in Melotte 111 to about 60, with a few dozen more possible stars — members of a wide-spread stellar family.

We’ll talk about a family of galaxies in Coma Berenices tomorrow.