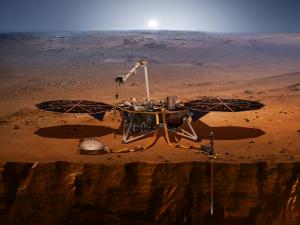 The latest mission to Mars, InSight, is shown on the surface of the Red Planet in this artist's concept. The lander, which is scheduled for launch as early as May 5, is designed to probe the Martian interior, providing new insights into Mars' structure and evolution. Its instruments include a seismometer (small white dome on the surface, at left) and a heat probe (drilling below the surface, at right, shown in cutaway). They will measure marsquakes and take the planet's temperature. After launch from Vanderberg Air Force Base in California, InSight will land on Mars on November 26. [NASA/JPL]

In more than 50 years of Mars exploration, scientists have barely scratched the surface of the Red Planet. But the next mission will go deeper. Its instruments are designed to study conditions below the surface. That will provide a better picture of how Mars is put together, and how it came together more than four billion years ago.

The launch window for InSight opens tomorrow. The craft will arrive at Mars around Thanksgiving. It’ll use three instruments to study the planet.

A seismometer will listen for “Marsquakes” — tremors set off by volcanoes, impacts by space rocks, and other causes. A probe will drill below the surface and measure heat rising from the planet’s core. And a radio transmitter will allow scientists to track the craft’s position to within about an inch. That will reveal tiny “wobbles” as Mars rotates on its axis.

Those observations will provide the best look yet at Mars’s interior. They’ll reveal the size of the planet’s core and the thickness of the surrounding mantle. They’ll also reveal the composition of the core.

That will help scientists better understand how Mars formed. Since it was born at about the same place as Earth, and from the same materials, it’ll also reveal more about the formation of our own planet — new “insight” into the early solar system.

And Mars is especially easy to spot right now. It stands to the lower left of the Moon at first light tomorrow, and looks like a bright orange star.