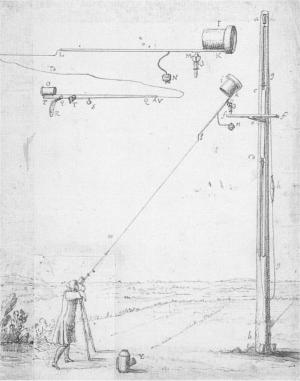 An astronomer uses an odd type of telescope in this 18th-century illustration. The telescope was created by mounting its glass lens on a small platform attached to the side of a tall pole. The eyepiece was on the ground, linked to the lens by a long wire. When the wire was pulled taut, the lens and eyepiece aligned. The largest of these used a maypole from a London neighborhood. Isaac Newton purchased the tall maypole and, in April 1718, had it moved to a park outside the city. James Pound, a clergyman and astronomer, used a large lens on loan from the Royal Society to create the telescope. Newton used some of Pound's observations with the telescope to calculate the orbits of the moons of Jupiter and Saturn.

For centuries, the people of the British Isles marked the beginning of summer not on the solstice, in June, but on May 1st. It’s a cross-quarter day, which comes roughly half way between a solstice and an equinox.

In Scotland and Ireland, the date was known as Beltane. People built bonfires to celebrate the longer days, and held rituals to protect their crops and livestock.

And in England, the date became known as May Day. People celebrated with village fetes, and they danced around the maypole. Dancers grabbed ribbons attached to the top of the pole, then circled around it, getting closer with each circuit.

Especially tall maypoles were erected in an area of London known as the Strand. The last of these poles was removed 300 years ago. But it found a new life — supporting one of the world’s largest telescopes.

The maypole was acquired by Isaac Newton, who had formulated laws of gravity and motion. In April of 1718, he had the pole moved to a park outside London for use by James Pound, a clergyman and astronomer.

Pound had the use of a large lens created by a leading European astronomer. The telescope was created by mounting the lens on the maypole. The eyepiece was on the ground, linked to the lens by a long wire.

Among other things, Pound used the telescope to measure the positions of the moons of Jupiter and Saturn. Newton used the observations in his calculations of the moons’ orbits — measuring a celestial dance around the maypole.