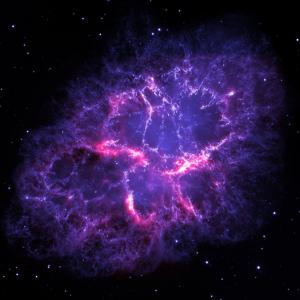 A composite image shows the Crab Nebula, the remains of an exploded star in the constellation Taurus. The star exploded in 1054 as seen from Earth, and was recorded by several cultures. The nebula, also known as Messier 1, is expanding at more than two million miles per hour (3 million kph). This image combines an optical view from Hubble Space Telescope (blue) with an infrared view from Herschel Space Telescope (red). [ESA/NASA/et. al]

The remnants of an exploded star are changing right before our eyes. Debris from the explosion is expanding. And the star’s “corpse” produces radiation and winds that sculpt the region around it.

The Crab Nebula stands close above the Moon this evening. It’s an easy target for small telescopes. Its filaments of gas and dust resemble the outline of a crab.

A century ago, astronomers compared pictures of the Crab taken several years apart. They found that the nebula was expanding. By determining the nebula’s distance, they calculated the rate of expansion — more than two million miles per hour. From that, they calculated that the Crab started expanding almost a millennium earlier. That corresponded to a bright “new” star seen in the year 1054. For several weeks, it was bright enough to see during the day.

Today, we know that the star was a supernova — the explosion of a star that was much heavier than the Sun. When the star exhausted the nuclear fuel in its core, the core collapsed, forming an ultra-dense neutron star. The star’s outer layers then exploded. We see those layers as the filaments that form the crab.

The dead core spins about 30 times a second, producing “pulses” of energy with each turn. The star also generates a powerful magnetic field and “winds” of charged particles. They sculpt material near the dead star. The wind also helps drive the expansion of the nebula — an expansion that’s easy to see.