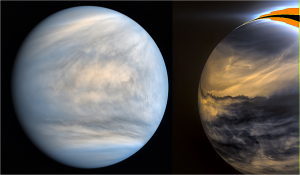 Two recent views from Japan's Akatsuki spacecraft show the clouds that top the atmosphere of the planet Venus. The image at left, which depicts the daytime sky, was shot in ultraviolet, while the one at right, in the infrared, shows the nighttime sky. Venus is covered by an unbroken cloud cover that hides its surface from view. The clouds are made mainly of sulfuric acid, and are blown around the planet by high-speed winds. The nighttime image shows a shield of thicker clouds above thinner clouds (orange). The thin spots show more heat radiating from the planet's surface, where temperatures are always about 865 degrees Fahrenheit. The bright crescent at the top of the night view is the planet's dayside, which is overexposed. [JAXA/ISIS/DARTS/Damia Bouic]

The clouds on Venus are beautiful to look at, but you wouldn’t want to fly through them. That’s because they’re made of sulfuric acid — a compound that can eat through just about anything.

The clouds cover the entire planet — there are no gaps anywhere. That blocks Venus’s surface from view; the only direct looks have come from Russian probes that died soon after landing.

The clouds are about 15 miles thick, and they top out at an altitude of about 40 miles. Above that, there’s a thin haze of sulfuric acid that extends miles higher. And acid rain falls from the clouds. Venus’s atmosphere is so hot and dense, though, that the raindrops evaporate high above the surface.

Like the droplets of water in the clouds here on Earth, the droplets of acid can have a strong electric charge. When enough of a charge builds up, it can trigger lightning. In fact, an orbiting spacecraft detected the “crackle” of a lot of lighting on Venus, suggesting it has frequent storms.

And the clouds are whipped around Venus by strong winds. They hit more than 200 miles per hour at the top of the clouds, although they’re much weaker at the bottom of the clouds.

Finally, the clouds reflect most of the sunlight that strikes them, which makes Venus shine brightly. And you can see just how brightly early tonight. Venus is the brilliant “evening star,” low in the west at sunset. It’s especially prominent tonight because it stands close to the crescent Moon.