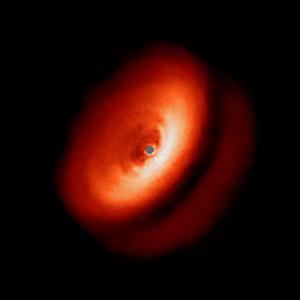 At first glance, this looks like a picture of a yo-yo or perhaps an ice cream sandwich. Instead, though, it is a disk of dust around IM Lupi, a young star in the constellation Lupus, the wolf. The star is still in the process of forming, so it's still surrounded by the cocoon of gas and dust from which it is being born. The disk of dust may be giving birth to planets. The image was obtained with a new instrument at the European Southern Observatory, and shows the disk in far greater detail than ever before. [ESO/H. Avenhaus et al./DARTT-S Collaboration]

Many stars have beautiful, even romantic names, such as Antares and Aldebaran, Vega and Altair. But some stars have names that aren’t romantic at all. Instead, they’re downright funny. Two examples shine faintly in the southern constellation Lupus, the wolf.

Many star names incorporate the genitive case of their constellation. That’s why the brightest star in Centaurus is not Alpha Centaurus, but instead Alpha Centauri.

For a star whose brightness fluctuates, the name usually starts with one or two letters before the constellation name.

For example, RR Lyrae is a famous variable star in the constellation Lyra.

For the variable stars in Lupus, though, these rules lead to some unintentional humor. The genitive form of Lupus is L-U-P-I, pronounced just like the word “loopy.” So there’s a variable star in Lupus named IM Lupi and another named RU Lupi. If you’re not too squeamish about grammar, there’s also IR Lupi. And if you read the letters as a word, you can add “BE” Lupi and “GO” Lupi.

The light from IM Lupi and RU Lupi varies because they’re newborns that are shrouded in the clouds of gas and dust that gave them birth. They’re so young that they may not even have planets yet, let alone intelligent beings that call these stars their own.

That’s probably a good thing, because any residents might not be too thrilled that we Earthlings have given their stars such “loopy” names.