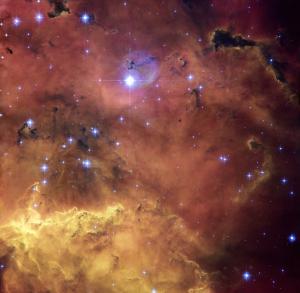 A Hubble Space Telescope image shows NGC 2467, a collection of star clusters and gas clouds that line up in the same direction from Earth. The bright star at top center is eroding the background cloud. Small clumps and filaments within the cloud may be giving birth to new stars. NGC 2467 is in the constellation Puppis, well to the left of Sirius, the brightest star in the night sky, and is low in the south on spring nights. [NASA/ESA/Orsola De Marco (Macquarie University)]

One of the problems with looking out into the universe is that we don’t have any depth perception — everything looks two-dimensional. That makes it hard to tell how far things are. And that can make it hard to tell if something is a single object, or several overlapping ones.

An example is a nebula known as NGC 2467. It’s in the constellation Puppis, which is low in the south on spring evenings. The nebula is well to the left of Sirius, the brightest star in the night sky, and is visible through binoculars.

The nebula looks like a single stellar nursery. It turns out, though, that it consists of several objects that happen to line up in the same direction. Two of them are clusters of young stars. The third contains both stars and the raw material for making more stars.

This third cluster is dominated by what looks like a single light — a star system that is tens of thousands of times brighter than the Sun. The system actually consists of at least four stars; more about that tomorrow.

The four stars are all quite hot, so they produce lots of ultraviolet radiation. That energy lights up the surrounding nebula. The UV vaporizes the gas and dust around the system, shutting down star formation. But it also creates a wave that pushes outward, compressing clouds of gas and dust and causing them to form more stars. In fact, a recent study found 45 stars that are being born along that wave — new life in a distant stellar nursery.