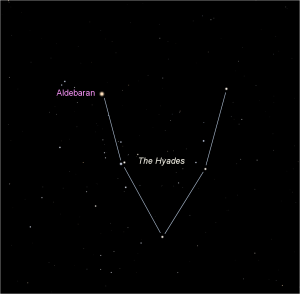 The face of Taurus, the bull, is outlined by the Hyades star cluster, which forms a rough letter V. The brightest star in the V, Aldebaran, is not a member of the cluster; the giant star is only about half as far as the Hyades. The cluster is less than one billion years old and spans about 65 light-years. It is well up in the west as night falls on early April evenings.

The bull’s long, V-shaped face stands about a third of the way up the western sky at nightfall. The bright star Aldebaran marks the bull’s eye. But the rest of the face is outlined by the Hyades, a stellar family that’s closer than any other star cluster — about 150 light-years.

The Hyades contains a few hundred stars. They’re all packed into a ball that’s about 65 light-years across. Quite a few other stars are just outside that ball. They probably were born with the cluster, but were pushed away by encounters with other members of the Hyades. They’re no longer bound to the cluster by their gravity. So over time, they’ll drift farther from their stellar birthplace.

The biggest, brightest members of the Hyades have already expired — they were so massive that they guzzled their nuclear fuel in a hurry. The biggest remaining members of the cluster are a bit more than twice as massive as the Sun. They’ve puffed up to giant proportions, and soon will shed their outer layers, leaving only their hot, dead cores.

So as time goes on, the Hyades will be left with fewer and fainter stars. Eventually, all but a few of them will drift away from the cluster. And those that remain will be fairly small and faint, so the bull will lose its bright face.

We’ll have more about the Hyades tomorrow.