Two planets are staging a beautiful conjunction in the dawn sky. Mars and Saturn are in the south at first light, separated by just a couple of degrees — the width of a finger held at arm’s length. Saturn is to the upper left of slightly brighter Mars. They’ll be at their closest tomorrow, but will stay close together for several days as Mars begins to pull away from Saturn.

Saturn and Mars look much alike right now, but that’s an illusion. The two worlds could hardly be more different.

Mars is a ball of rock a bit more than half the diameter of Earth. It has a thin atmosphere, and its surface is coated with orange dust that gives the planet an overall reddish appearance — hence its nickname, the Red Planet.

Saturn is a ball of gas that’s almost 10 times Earth’s diameter. Clouds atop its thick atmosphere give the planet an overall pale golden color. Saturn rotates so fast that it’s a bit flattened, like a squashed beachball.

What really sets Saturn apart, though, is its rings. The main rings span almost the distance between Earth and the Moon. They’re only a few yards thick, but they’re made of particles of ice and dust that reflect a lot of sunlight. So at the right angle, the rings can contribute almost as much light as Saturn itself.

And while Mars has only two small, insignificant moons, Saturn has more than 60, including several that are interesting in their own right — worlds of rock and ice orbiting a solar-system giant. 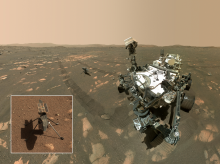