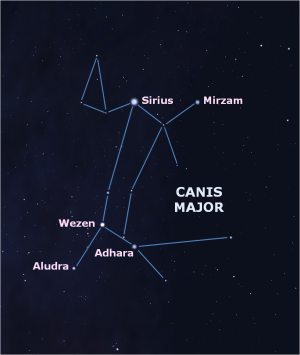 Canis Major, the big dog, stands low in the south-southeast at nightfall (depicted here) in late February. It features the brightest star in the night sky, Sirius, also known as the Dog Star. But the constellation also offers some stars that are even more impressive than Sirius, such as Mirzam and Wezen, but that look fainter because they're much farther away. The stars of Orion stand above the big dog, with Orion's three-star belt pointing almost directly toward Sirius.

Winter brings out the big dogs — some of the most prominent constellations of all. And one of those really is a dog: Canis Major, the big dog. It’s best known for its leading light: Sirius, the Dog Star, the brightest star in the night sky. It’s a third of the way up the southeastern sky at nightfall.

But there’s more to Canis Major than just Sirius. It includes several bright stars, most of which are below or to the right of Sirius. When you link them up, they really do look like the outline of a dog.

Like all constellations, Canis Major consists of more than just a connect-the-dots pattern of stars, though. It covers a patch of sky that includes the area outside that pattern as well. And within those borders, you can find several deep-sky objects — objects like star clusters, which are far beyond most of the individual stars visible in Canis Major.

Perhaps the best known is M41. It’s not far below Sirius, and is an easy target for binoculars. It’s about 2300 light-years away, and consists of about a hundred stars.

The cluster probably is about 200 million years old. At that age, its biggest, heaviest stars have already expired, leaving small, dense corpses known as white dwarfs. The next-heaviest stars will soon follow that same path. Those stars have puffed up to become red giants. They’re easily visible through binoculars — sparkling red and orange jewels along the “collar” of the big dog.