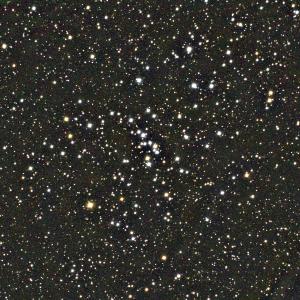 Messier 48, a star cluster in the southern sky, is about 1,500 light-years away, and contains more than 100 stars. It was cataloged by French astronomer Charles Messier in the 18th century. He made an error in calculating its position, though, so other astronomers couldn't find it. They later discovered Messier's mistake and found that the cluster had been "rediscovered" and listed as NGC 2548. [NOAO/AURA/NSF]

Many wonderful astronomical objects are visible to the eye alone — from the Moon to the Andromeda Galaxy. But binoculars add a whole new layer to our view of the universe. They’re especially good at revealing star clusters — families of stars that are packed close together.

An example is M48. It’s in the southeast this evening, well to the left of sparkling Sirius, the brightest star in the night sky.

French astronomer Charles Messier cataloged the cluster in 1771. It was the 48th object in his list of deep-sky objects that might be mistaken for comets, so it’s known as Messier 48.

When Messier was calculating its position, though, he made a mistake. That caused him to place it in the wrong spot. So when other astronomers looked for it, they couldn’t find it. In the 1780s, though, two astronomers found what they thought was a different cluster, which became known as NGC 2548. And in the twentieth century, yet another astronomer discovered the error in Messier’s calculations. When the error was corrected, it turned out that M48 and NGC 2548 were the same object — a beautiful star cluster.

The cluster is about 1500 light-years away, and contains more than a hundred stars. They’re all about 300 million years old — just a few percent the age of the Sun. So some of its higher-mass stars are still around — stars that shine far brighter than the Sun. They help make M48 a pretty target for a good pair of binoculars.