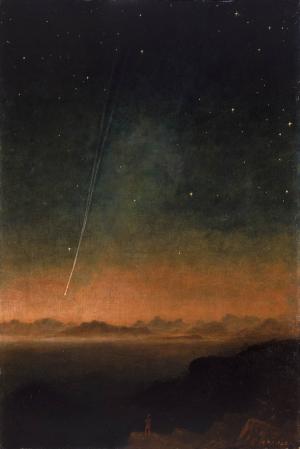 The Great Comet of 1843 shines above the Cape of Good Hope in this painting by Charles Piazzi Smyth, a British astronomer at the Royal Observatory in South Africa. The comet was the brightest in several centuries, visible even in daylight, and its tail was the longest seen until the late 20th century, spanning more than 100 million miles. [Charles Piazzi Smyth/Royal Museums Greenwich]

Comets are the most unpredictable of astronomical objects. They can delight, they can disappoint, they can vanish with a puff of dust. On rare occasions, though, they can be great — brilliant spectacles that are visible even in daylight.

One such over-performer was first reported 175 years ago today. The Great Comet of 1843 was a member of a group of comets with orbits that carry them quite close to the Sun. They’re fragments of a much bigger comet that shattered about 900 years ago.

The great comet passed closest to the Sun on February 27th, at a distance of just half a million miles. At that range, solar energy vaporized much of the comet’s ices, which in turn released vast amounts of dust. Solar radiation and the solar wind blew the gas and dust away from the comet, forming a long, glowing tail.

The comet became easily visible by late February. It was quite close to the Sun, but so brilliant that it was visible in daylight. As it moved away from the Sun it became even more impressive. Its tail grew longer, stretching across 200 million miles — the longest known comet tail until the 1990s. Seen from Earth it spanned three or four times the width of a fist held at arm’s length.

By the end of March, though, the Great Comet of 1843 was gone, headed into the chill of the outer solar system. Astronomers couldn’t track it long enough to plot its orbit. They know only that it won’t return to the inner solar system for several centuries.