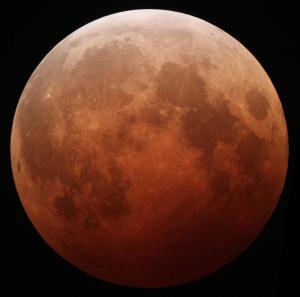 The Moon will turn dark red or orange in the early hours of January 31 as it passes through Earth's shadow, creating a total lunar eclipse similar to this one in 2014. The eclipse occurs at full Moon. Since this is the second full Moon of January, it's also known as a Blue Moon. And because it is closer to Earth than average, it's a Super Moon. [Alfredo Garcia Jr./Wikipedia]

The full Moon will experience a whole spectrum of colors tonight. As the second full Moon of the month, it’s known as a Blue Moon. It won’t actually look blue, though. Instead, as seen from most of the United States, it will turn dark orange or red as it undergoes a total eclipse.

The meaning of “blue moon” has undergone several transformations over the years. In recent decades, it’s come to mean the second full Moon in a calendar month. On average, that happens about every 2.7 years. Thanks to the shortness of February, though, this year it’ll happen again in March.

Lunar eclipses are more common, but still rare. There are several per year. Not all of them are total, though, and any eclipse is visible from only a portion of Earth’s surface.

This eclipse gets started in the wee hours of tomorrow morning as seen from the United States. In fact, from the eastern half of the country, the eclipse will be under way as the Moon sets. The western states will see the entire total eclipse, as the Moon both enters and exits Earth’s dark inner shadow.

When the Moon is fully immersed in that shadow, it’ll turn dark orange or red — the result of sunlight filtering through Earth’s atmosphere. The color is more pronounced in photographs than it is to the eye alone.

The Moon will be just past its closest approach to Earth during the eclipse, so it will appear slightly larger than average. That makes this event a Super Blue Lunar Eclipse.