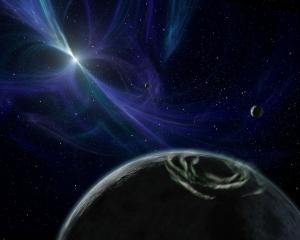 This artist's concept shows two planets orbiting PSR 1257+12, the dead core of a once-mighty star. Known as a neutron star, it is almost twice as massive as the Sun but only as wide as a city. It rotates rapidly, producing powerful beams of energy, so it is also known as pulsar. The planets (the appearance of which is hypothetical) must have formed after the original star exploded as a supernova, from debris left behind by the explosion. [NASA/JPL/Caltech/R. Hunt (SSC)]

When a star explodes as a supernova, it’s bad news for any nearby planets. The shockwave blasts the planets to cosmic dust. But that act of cosmic destruction clears the way for new acts of creation: the birth of new planets. And a recent study suggests a way for the second-chance planets to take shape.

A supernova can form when a massive star can no longer produce nuclear reactions in its core. The core collapses, while the outer layers blast into space at up to a few percent of the speed of light. The collapsed core can form a neutron star. It’s up to a couple of times the mass of the Sun, but only a dozen miles or so across.

Astronomers have discovered small, rocky planets around a few neutron stars. There’s no chance that these worlds survived the explosions, so they must have formed afterwards.

One neutron star where astronomers thought they saw a planet is Geminga. It’s in the constellation Gemini, which is in the east at nightfall. The constellation is marked by its two brightest stars, Pollux and Castor — Gemini’s twins.

The possible planet turned out to be a false alarm. But the star is plowing through the galaxy at high speed. It sweeps up grains of dust from interstellar space as it does so.

The recent study says that some of those grains have formed a disk around the star. It contains enough material to make about five Earth-size planets. Over time, some of these grains may merge to form new planets — cosmic birth after cosmic destruction.