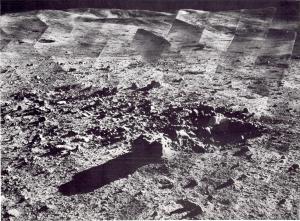 Scientists compiled this panorama of the lunar landscape from pictures snapped by Surveyor 7, America's final robotic lunar lander, in January 1968. The craft landed near the rim of Tycho Crater, which is visible in the background. The ground is covered with boulders and smaller rocks blasted out by the impact that formed the crater. Surveyor 7 was the only mission in the Surveyor series dedicated strictly to science. The primary goal of the earlier missions was to make sure that it was safe for Apollo astronauts to land on the Moon. [NASA]

The Surveyor program of the 1960s was designed to prove that it was safe for Apollo astronauts to land on the Moon. So the first few missions touched down on the smooth volcanic plains where the first astronauts would land. By the time the final Surveyor took flight, though, Apollo planners had all the intel they needed to land safely. So Surveyor 7 was dedicated strictly to science.

The three-legged craft landed on the Moon 50 years ago tonight, on the flank of Tycho, a big, bright crater in the southern hemisphere. The crater was gouged by an impact more than 100 million years ago. On the airless Moon, that’s fairly recent — the crater looks fresh, and it’s surrounded by bright “rays” of material blasted out by the collision. Surveyor 7 landed in that debris field, which included boulders gouged from deep below the surface.

Over the following few weeks, Surveyor snapped more than 21,000 pictures of its surrounding landscape — the roughest seen by any Surveyor. Just as important, it carried instruments for digging into the powdery lunar dirt and analyzing the dirt and rocks.

Those instruments found that the chemistry around Tycho was similar to that of the volcanic plains, with a little less iron and related elements.

Surveyor 7 also saw a glow above the horizon at sunset. That could have been caused by grains of electrically charged moondust levitating above the surface — a bonus discovery from America’s final robotic lander on the Moon.