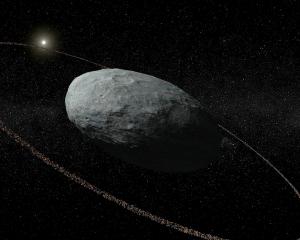 Rings encircle the dwarf planet Haumea in this artist's concept. The potato-shaped object, which also has two small moons, orbits the Sun at an average distance of about four billion miles, which is comparable to Pluto's distance. The ring was discovered when Haumea passed in front of a star. The star's light flickered slightly both before and after it disappeared behind Haumea, suggesting that the light was blocked by rings. This makes Haumea the most distant object in the solar system with known rings. [IAA-CSIC/UHU]

The oddest of the Sun’s dwarf planets is shaped a bit like a rugby ball and has two small moons. And as astronomers reported a couple of months ago, it also has a thin ring. That makes it the most-distant object in the solar system with a known ring.

Haumea orbits at an average distance of about four billion miles from the Sun — about the same distance as Pluto. And in some ways, it’s similar to Pluto. It’s made mainly of ices, so it has a bright surface. Unlike Pluto, though, it has an odd shape — it looks like a 1400-mile-long rugby ball, or a long, skinny potato.

Back in January, Haumea passed in front of a star. Such an event is known as an occultation. By observing it from several locations, astronomers can measure an object’s size and shape, and look for evidence of moons and rings. That’s especially helpful for objects like Haumea, which are so small and far away that they appear as little more than pinpoints in even the biggest telescopes.

The passage was visible from much of Europe, so 10 observatories there turned their gaze toward the occultation. And they noticed that the star’s light flickered a bit before and after the star passed behind Haumea itself. That revealed that Haumea has a ring. It might consist of debris from an impact by a small asteroid, or material spun out into space by the dwarf planet’s fast rotation. Either way, it makes Haumea the farthest body in the solar system with a known ring.