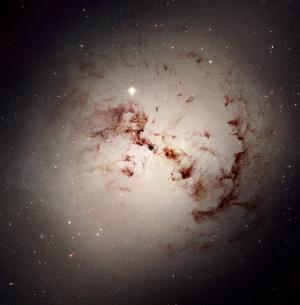 Lanes of dark dust cross the starry form of NGC 1316, a giant galaxy that is 60 million light-years away, in this Hubble Space Telescope photo. The galaxy may be the remnant of two spiral galaxies that smashed together, stirring up their stars and dust. As a result, NGC 1316 looks like a cross between a spiral and an elliptical galaxy, which is shaped a bit like a fat football. [NASA/ESA/Hubble Heritage Team (STScI/AURA)]

Giant galaxies like the Milky Way didn’t start out as behemoths. Instead, they began small and grew larger as they swallowed other galaxies. An example of a galaxy that’s still under construction is in the faint constellation Fornax, the furnace.

Fornax skirts across the southern sky during the evening hours tonight. Beyond its dim stars lies one of the nearest galaxy clusters — 60 million light-years away. Its brightest member is NGC 1316.

The brilliant galaxy is a cross between a spiral and an elliptical. Most elliptical galaxies look like glowing footballs or spheres, with little gas and dust — the raw materials for making more stars. But NGC 1316 looks so odd that an astronomer once called a photograph of it “defective” because it showed such strange features. We now know that those features are lanes of dark dust — one of the main features of a spiral galaxy.

NGC 1316 may be the remnant of two spirals that smashed together. It emits copious amounts of radio waves — a sign of disturbance. And loops outside its disk trace the paths of smaller galaxies that are falling into it.

Although NGC 1316 is the brightest galaxy in the Fornax cluster, it’s not at the cluster’s center. Instead, it’s off to the side, in a clump of galaxies that’s probably falling into the main cluster. So just as the galaxy is still assembling itself, so is the entire cluster of galaxies.

So the universe, it seems, is still a work in progress.