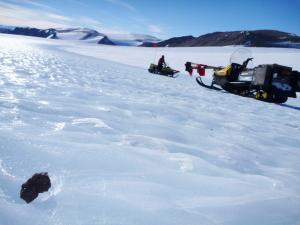 A meteorite sits on the Antarctic ice while members of a scientific expedition prepare to bag it. Other meteorite hunters, part of a project called ANSMET, are deploying at two locations in Antarctica in early December to continue the search for these bits of cosmic debris. In four decades of searches, ANSMET has gathered more than 22,000 extraterrestrial samples, including some from the Moon and the planet Mars. [ANSMET/USAP]

Rock hunters have been known to visit some tough environments to collect their treasures. But for the next few weeks, a group of scientists will be hunting rocks in perhaps the most extreme environment on the planet: the Antarctic ice. The researchers are hunting meteorites — chips of rock from asteroids and other solar system bodies.

A project known as ANSMET has been visiting Antarctica every southern summer since the 1970s. It’s collected more than 22,000 space rocks.

The scientists journey to McMurdo Station, the largest settlement on the continent. They survey their planned hunting grounds from the air to confirm that the areas are safe and productive. Then they’re ferried to the ice by small aircraft. They spend weeks on the ice, living in tents.

When the weather conditions are good, they traverse the ice on snowmobiles. When they find a likely meteorite, they give it an ID number, log its position with GPS, and take its picture. They then grab the specimen with a Teflon bag, making sure not to touch it with their fingers or tools — a precaution against possible contamination.

At the end of the season, the rocks are shipped to a lab at Johnson Space Center for cataloging and preliminary analysis. Samples are then sent to scientists around the world. Eventually, all the samples are sent to the Smithsonian for permanent storage and curation — rocks from beyond Earth found in one of the most extreme environments on Earth.