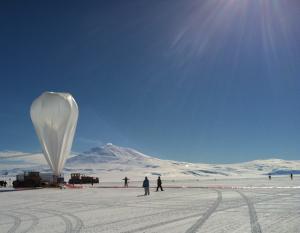 Technicians prepare to launch a giant research balloon from Antarctica during a prior season. Early this month they will launch a similar balloon carrying Super-Tiger, a set of instruments designed to catch and analyze the heaviest cosmic rays -- the nuclei of atoms heavier than iron blasted into space by exploding stars. The balloon should stay aloft for weeks, circling around Antarctica while it probes the universe. [NASA/BPO]

A tiger is headed for the skies above Antarctica. Make that a super tiger. If everything goes as planned, it’ll float 25 miles above the continent for weeks, hunting for mysterious particles from beyond our solar system.

Super-Tiger is a set of instruments that’ll be lifted by a giant balloon. It flew once before, five years ago, and set a record by remaining aloft for 55 days.

Its mission is to catch and analyze the heaviest cosmic rays — the nuclei of atoms heavier than iron blasted into space by exploding stars. Studying these elements can help astronomers understand what’s happening in the cores of stars that explode as supernovae.

The balloon will launch from McMurdo Station, the largest settlement in Antarctica. The launch window opens in early December, when the weather generally becomes calm and clear.

Southern-summer air currents form a vortex around Antarctica. A balloon launched into that vortex circles the continent. When its mission is done, its payload parachutes onto the Antarctic ice for recovery and refurbishment for future flights.

Another advantage is Antarctica’s 24-hour daylight. It provides a steady supply of solar power for the payload, and it allows the balloon to maintain a steady altitude.

NASA generally launches two or three balloons from Antarctica every southern summer. This year, though, Super-Tiger is the only one ready for flight — a tiger ready to circle around the bottom of the world.