A couple of years ago, astronomers announced the discovery of a pair of neutron stars in the widest orbit yet seen in such a system. The discovery wasn’t made by the pros, though. Instead, it was made by two high school students.

The students found the binary by studying old observations of a pulsar — a neutron star that spins rapidly, emitting “pulses” of radio waves. Changes in the timing of the pulses revealed the companion star.

Over the past decade, students from around the country have helped in the hunt for pulsars. College students from Texas to Wisconsin, for example, have remotely controlled the Arecibo telescope in Puerto Rico — one of the world’s largest radio dishes. Their observations have resulted in the discoveries of dozens of pulsars, which are the crushed corpses of once-massive stars.

Such discoveries can help astronomers learn about the stars that become pulsars, and how pulsars affect their stellar neighborhoods. And they can help in the efforts to use pulsars to detect gravitational waves.

High school students are helping in the search for pulsars as well. The Pulsar Search Collaboratory trains them to search through old radio-telescope observations for the pulses from these dead stars. That project has also produced quite a few discoveries, including the binary system announced in 2015.

These projects help advance our understanding of the universe — while training future generations of astronomers. 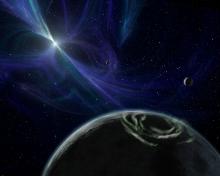