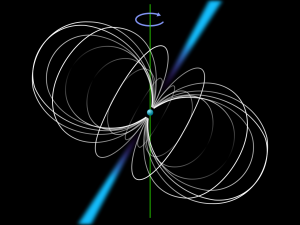 This illustration depicts a pulsar, the dead but busy corpse of a once-mighty star. When a massive star can no longer produce nuclear energy in its core, the core collapses and the outer layers blast into space as a supernova. In most cases, the collapsed core is a neutron star. It's up to about twice the mass of the Sun, but no bigger than a good-sized city. Many of these dense stellar corpses rotate rapidly, producing "pulses" of energy, so they are called pulsars. In this illustration, the pulsar is the tiny object at the center. As it rotates on its axis (shown by the green arrow at top), it generates a powerful magnetic field. The field produces twin beams of energy (blue rays) that rotate around the star's axis. If Earth happens to line up in the path of one of the beams, telescopes detect the on-again, off-again pulsations, usually as radio waves. The first pulsar was discovered in 1967. [Roy Smits/Wikimedia]

In the fall of 1967, Jocelyn Bell was looking for a “scruffy” source of radio waves in the constellation Vulpecula. Bell was working on her PhD at Cambridge University in England. She’d been using a new radio telescope to study quasars — brilliant objects billions of light-years away.

The telescope’s observations were recorded on chart paper. And one day that summer, the chart showed what Bell later called “a bit of scruff” — an odd signal that had never been seen before.

Bell continued her quasar work. But when she was done, she decided to check out the odd signal. She used a faster recorder, which spread out the signal, allowing her to see its details. And 50 years ago this week, she got a clear result — a series of pulses that were one-and-a-third seconds apart.

Bell and her adviser, Anthony Hewish, ruled out satellites and other forms of interference. And a colleague determined the source was far outside the solar system.

For a while, the astronomers considered that the pulses might have come from another civilization. But in December and January, Bell found similar signals from three other sources — suggesting that they were natural objects.

When the discovery was announced, another astronomer suggested the sources were the dead cores of mighty stars — something that had been predicted, but never seen. Those objects were soon called pulsars — bizarre stellar corpses discovered half a century ago.