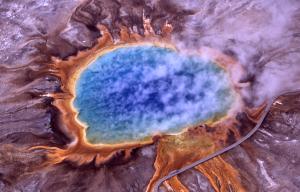 Mats of algae, bacteria, and other microscopic organisms color the edge of Grand Prismatic Spring in Yellowstone National Park in shades of orange, yellow, and red. Scientists first discovered organisms living in extremely hot waters in Yellowstone in 1967. Other organisms have since been found in other extreme environments, such as super-heated water around vents on the ocean floor, suggesting that life is tenacious and could be found in difficult environments on other worlds. [Jim Peaco/National Parks Service]

None of the thousands of planets found in other star systems is a good match for our own Earth. Even so, that doesn’t mean that it’s impossible for those worlds to harbor life. In fact, scientists have found that life can thrive in the most unlikely of places. Such organisms are known as extremophiles. And the first of them were reported in a study published 50 years ago today.

Thomas Brock was a biologist at the University of Indiana. He was studying life in pools of super-hot water at Yellowstone National Park. In 1965, he found mats of microscopic organisms at Octopus Spring, where temperatures were upwards of 175 degrees Fahrenheit. And the following year, he and a student found similar organisms in another hot spring. Before the discovery, conventional wisdom said that bacteria couldn’t survive temperatures above about 140 degrees.

Since then, scientists have discovered microscopic organisms in several extreme ocean environments. That includes both sub-freezing water, and super-hot water coming from mineral-rich vents on the ocean floor.

Other extremophiles have been found in layers of rock many miles deep. And a larger organism, known as a tardigrade, has survived days of exposure to the vacuum of space.

That doesn’t mean that life exists on any of the inhospitable planets that have been discovered. But it does mean that we can’t rule out the possibility of life in even the most unlikely of places.