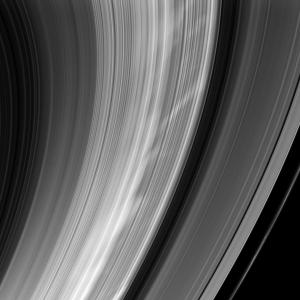 Bright "spokes" radiate through Saturn's rings in this image from the Cassini spacecraft. The most likely explanation is that the spokes are made of tiny grains of dust. The particles acquire an electric charge, so they levitate above the rings, pulled along by Saturn’s magnetic field. [NASA/JPL/SSI]

The crescent Moon has a bright companion early this evening — the planet Saturn. It looks like a fairly bright star to the lower left of the Moon as darkness falls. They’re quite low in the sky, though, so any buildings or trees along the horizon will block them from view. They set not long after the sky gets fully dark.

Saturn is best known for its beautiful rings — thousands of rings in all. Most of them clump together in three wide bands.

The rings include several interesting features. Some of the rings are braided like a loaf of challah bread. Some aren’t complete rings at all. And at times, one of the main bands of rings shows dark “spokes” — radial features like the spokes of a bicycle wheel.

The spokes were first seen by the Voyager probes almost four decades ago. They were studied in detail by the Cassini orbiter, which ended its mission in September.

The spokes aren’t permanent features — they come and go. They disappear during the middle of Saturn’s winter and summer, but return around the equinoxes.

The spokes aren’t part of the rings themselves — they rotate at a different speed. The most likely explanation is that the spokes are made of tiny grains of dust. The particles acquire an electric charge, so they levitate above the rings, pulled along by Saturn’s magnetic field.

It’s not certain what causes the spokes to form. Whatever the cause, though, the spokes help make Saturn’s rings both beautiful and intriguing.