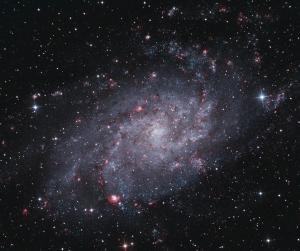 M33, the Triangulum Galaxy, whirls through space like a big fuzzy pinwheel. Stellar nurseries (reddish blobs) line the galaxy's spiral arms, while lanes of dark dust block the light of many stars. The galaxy is about three million light-years away, in the constellation Triangulum, which is well up in the east as darkness falls on November nights. [Alexander Meleg/Wikipedia]

November’s evening skies offer constellations with great names, intriguing back-stories, and beautiful star patterns. And then there’s Triangulum, which suffers from a distinct lack of imagination. As the name suggests, it consists of three main stars that form a triangle — an accurate if dull description for one of the smallest of all the constellations. It’s well up in the east as darkness falls.

The triangle is actually a thin wedge. And there’s an odd coincidence involving the stars at the base of the wedge: One of them is precisely third magnitude, while the other is precisely fourth magnitude.

Under the magnitude scale, a lower number means a brighter star. So the third-magnitude star is the brighter of the two — about two-and-a-half times brighter. Both stars are easily visible from dark skywatching sites, but are more difficult targets from the city.

The brighter star is Beta Trianguli. It’s a stellar giant about 127 light-years from Earth. The other, Gamma Trianguli, is a little smaller and closer. The star at the tip of the wedge, Alpha Trianguli, is even closer. It’s in the process of swelling up to become a giant.

Perhaps the most impressive feature in Triangulum isn’t a star at all, though. Instead, it’s M33, the Triangulum Galaxy. Through binoculars, it looks like a fuzzy star not far from Alpha. But that little smudge of light is actually a pinwheel of tens of billions of stars — three million light-years away.