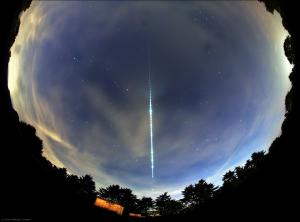 The Leonid meteor shower is at its best in mid-November, in the hours between midnight and dawn. If meteor watchers are very lucky, the shower might produce a brilliant fireball like this one, which streaked above the Netherlands and Belgium in September. The meteor probably was spawned by a space rock no more than a few inches in diameter, which is far larger than the bits of material that produce most Leonids. An automated camera caught the meteor. The camera "blinked" 14 times per second, producing a blobby streak. By counting the number of gaps in the meteor streak, astronomers can determine the meteor's speed and how long it was visible. [K. Miskotte/Dutch Meteor Society]

The three brightest objects in the night sky huddle low in the twilight tomorrow morning. You need a clear eastern horizon to see them, though. And the presence of one of the three means there should be good viewing for a meteor shower.

The highest and brightest member of the trio is the Moon. It’ll be new in a couple of days, so sunlight illuminates only a sliver of the hemisphere that faces our way — the barest of crescents.

The other two lights stand below the Moon. The brighter of them is the planet Venus, the “morning star.” It’s quite low in the sky, so you need a clear horizon to find it. It’s dropping toward the Sun in our sky, and soon will disappear in the Sun’s glare.

The final member of the group is Jupiter, the largest planet in the solar system. It’s headed in the opposite direction from Venus, so it will stand a little higher in the sky each morning. It’ll get brighter over the coming months, too.

The Moon’s presence as a dawn crescent means it won’t interfere with a meteor shower that’s building toward its peak. The Leonid shower is expected to be at its best over the next night or two. A bright Moon can overpower most of the meteors. But this time around, the Moon won’t be anywhere in sight during the best time for meteor watching, which comes after midnight.

So there are several good targets for early skywatching the next couple of days — the Moon, a pair of bright planets, and a meteor shower.