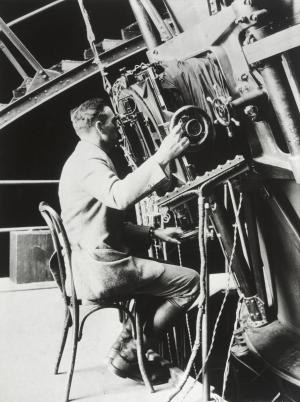 A century ago, many astronomers thought the entire universe was confined to our home galaxy, the Milky Way. And none of them knew that the universe was expanding. But a telescope that took its first look at the sky 100 years ago today changed that.

The 100-inch telescope at Mount Wilson Observatory was the brainchild of George Ellery Hale. He’d already headed development of two other giant telescopes, but he wanted more. The bigger the telescope, the more light it gathers, allowing it to see objects that are fainter and farther away — opening up more of the universe to our curious eyes.

Building the telescope wasn’t easy. Crews used mule teams to lug the telescope and its dome up treacherous mountain trails. But when it was finished, it was the largest telescope in the world — a distinction it held for three decades.

One of the astronomers who used the new telescope was Edwin Hubble, for whom Hubble Space Telescope is named. He looked at a special type of star in the Andromeda Galaxy. These stars are good signposts for measuring astronomical distances. Hubble found that Andromeda was far, far outside the Milky Way — an “island universe” of billions of stars.

And measurements of the motions of Andromeda and other galaxies revealed that the universe itself is expanding — a discovery that helped lead to the idea of the Big Bang. So the hundred-inch telescope greatly expanded the universe — and our understanding of its birth.