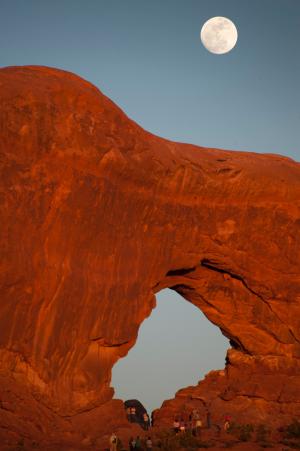 Visitors to Arches National Park watch a full Moon climb skyward. October 28 is designated as Observe the Moon Night, and many museums, planetariums, and other groups have planned special moonwatching activities. (The Moon is just past first quarter, not full, however.) [NPS/Neal Herbert]

A beautiful Moon slides across the southwestern sky this evening. It’s a day past first quarter, so the Sun illuminates about half of the lunar hemisphere that faces our way. The Moon sets by around 1 or 2 a.m.

Many groups across the country and around the world will be keeping an especially close watch on the Moon tonight. That’s because it’s Observe the Moon Night — an event created by NASA almost a decade ago to promote its Moon exploration program. The event has caught on. Hundreds of museums, schools, planetariums, and other science-related groups host events, in the United States and dozens of other countries.

The event is timed so that the angle of the Sun makes it easier to make out features on the lunar surface. A lower Sun angle creates longer shadows, so mountains, canyons, and craters really stand out when you see them through a telescope.

You can make out several dark volcanic “seas” on the Moon with your eyes alone. Near the limb of the illuminated portion of the lunar disk, look for a small, round feature known as the Sea of Crises. Nearby, there’s a bigger sea — the Sea of Tranquility, where astronauts first landed on the Moon, back in 1969. And down at the bottom of the Moon, see if you can make out a large crater with streaks radiating away from it — the crater Tycho.

These and many other prominent features make the Moon a beautiful sight — not just tonight, but all year long.