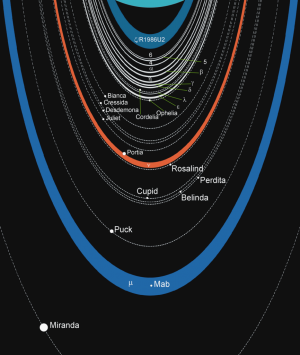 Small moons orbit within the faint rings of the planet Uranus, as shown in this diagram. The rings form several narrow bands, shown in white, and a few wider bands, in blue and orange. Some of the moons acts as shepherds, keeping the ring material in place. Most of the rings particles are tiny, but some are as big as pickup trucks. [Ruslik0/Wikimedia]

Like peanut butter, planetary rings come in different textures. The rings of Jupiter and Neptune are smooth because the ring particles are tiny. But the rings of Saturn and Uranus are more chunky. They contain plenty of small particles, but they have big chunks mixed in. These different textures can reveal how the rings were made.

The particles in the rings of Jupiter and Neptune probably flake off the moons of these planets when the moons are hit by big space rocks. The bits of debris then spread out to form rings.

The rings of Uranus are darker than charcoal, so they were discovered just 40 years ago. Even then, they were found only because they blocked the light of a star that was passing behind them.

There are several tight bands of material within the rings. These bands are no more than a few miles wide. They probably are “penned in” by small moons, which act like shepherds — their gravity keeps their flocks of ring materials from drifting away.

And Uranus is putting in its best appearance of the year. It rises at sunset, in the constellation Pisces, and remains in view all night. It’s also closest to us for the year, so it shines brightest. Even so, you need binoculars to find it.