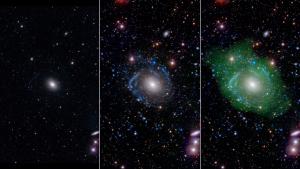 The giant galaxy UGC 1382, which is in the constellation Cetus, the sea monster, is a bit of a surprise. At visible wavelengths alone (left), it looks like a dull elliptical galaxy, which has already used up all of its gas and is no longer giving birth to new stars. A few years ago, though, scientists took a closer look at it in ultraviolet wavelengths (center), which revealed bright spiral arms around the galaxy's core. Adding radio wavelengths (right, in green) reveals massive clouds of hydrogen gas around the galaxy, indicating that it has plenty of materials for making many more stars. [NASA/JPL/Caltech/SDSS/NRAO/L.Hagen and M.Seibert]

Astronomers got quite a surprise recently. What they thought was a fairly ordinary galaxy turned out to be one of the largest galaxies they’d ever seen.

UGC 1382 had been classified as an elliptical galaxy — a type that no longer gives birth to new stars. But a closer look revealed an enormous disk of stars around the galaxy’s center. The disk includes spiral arms that are giving birth to new stars. The stars are so spread out, though, that the disk is hard to see.

Our galaxy, the Milky Way, is also a giant spiral. Its disk of stars spans more than a hundred thousand light-years. But UGC 1382’s disk is more than 500,000 light-years across — several times the diameter of the Milky Way’s disk.

The galaxy doesn't stop there, though. Beyond the stellar disk is a disk of gas, just as there is in the Milky Way. When you count that, UGC 1382 is a whopping 700,000 light-years across. That’s nearly a third of the distance between the Milky Way and the Andromeda galaxy, the closest big galaxy to our own.

Gargantuan though this galaxy is, it isn’t unique. Three decades ago, astronomers found a similar galaxy, Malin 1. But UGC 1382 is much closer. That will make it easier for astronomers to study — and figure out how such a monster galaxy came to be.

Appropriately enough, this galactic monster is in Cetus, which represents a sea monster. It clears the horizon in late evening, spanning much of the southeastern quadrant of the sky.