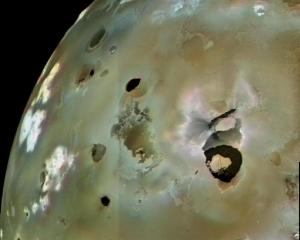 The largest volcanic feature on Jupiter's moon Io looks like a dark horseshoe at the lower right of this mosaic of images from the Galileo spacecraft. Known as Loki Patera, it covers an area bigger than Lake Ontario. It's filled with molten rock, which forms a dark crust as its surface cools. Occasionally, though, the crust sinks and melts in a wave that takes weeks to traverse the entire feature. The exposed lava then cools and forms a new crust. [NASA/JPL]

A giant lake sits on the surface of Io, one of the big moons of Jupiter. It’s about 125 miles wide, and it covers an area bigger than Lake Ontario. But that’s where the comparisons to earthly lakes end. That’s because Loki Patera is filled not with water, but with lava.

Io is the most volcanically active body in the solar system. The gravity of Jupiter and its other big moons pull at Io, stretching and squeezing its interior. That melts rock below the surface. Some of the sulfur-rich molten rock punches its way to the surface, forming volcanoes, along with pools of super-hot lava.

There could be more than 400 active volcanic features on Io. And Loki Patera is the biggest of them all. It’s been filled with molten rock since at least 1979, when it was discovered in pictures by Voyager 1. But it doesn’t always look the same. Every year or two, it flares up.

That’s probably because the top of the lake gets cooler, so it forms a solid crust. The solid rock is denser, so it sinks, allowing fresh molten rock to bubble to the surface. This process happens in waves, which take several weeks to ripple across Loki Patera — the largest active volcano in the solar system.

We can’t see Io right now, but we can see Jupiter — barely. The giant planet is close to the left of the crescent Moon shortly after sunset. Although it’s quite low in the sky, if you have a clear horizon it should be fairly easy to spot through the fading twilight.