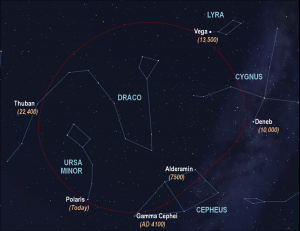 While the star Polaris marks the north celestial pole today, that won't always be the case. Over the next 26,000 years or so, the pole will loop around the northern sky, passing several bright stars. One of these is Alderamin, the leading light of the constellation Cepheus the king, which will mark the pole around the year 7500. It won't be as close to the celestial pole as Polaris, as this chart illustrates, but it will be the closest bright star to the pole for centuries. [Damond Benningfield/Stellarium]

Cepheus the king passes high overhead tonight. The constellation’s five main stars form a pentagon. None of them is especially bright, though, so you’ll probably need a star chart to find his majesty.

Even so, the brightest star in Cepheus has quite a future: It’s destined to become the North Star.

Right now the North Star is Polaris, the star at the end of the handle of the Little Dipper. The star marks true north because Earth’s axis happens to point nearly straight at it. So as Earth spins, Polaris remains in the same position, never rising or setting.

However, as the gravitational forces of the Sun and Moon tug at our planet, it wobbles. That makes its rotation axis gradually point elsewhere. In the year 7500 A.D., it’ll point at the brightest star in Cepheus, Alderamin.

Alderamin won’t be as good a North Star as Polaris is now. For one thing, it isn’t quite as bright. For another, while Polaris is less than a degree from the celestial pole, Alderamin won’t get closer than a couple of degrees.

Alderamin is easily visible from dark country locations, and even from many suburbs, passing high overhead tonight: our future North Star.