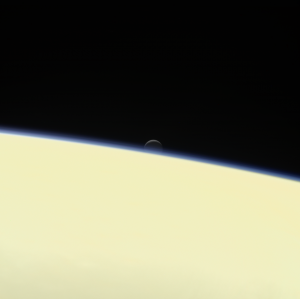 The Cassini spacecraft ended its mission to the Saturn system on September 15, when it plunged into the giant planet's atmosphere. One of its final views of the planet was this image of the moon Enceladus setting behind Saturn's limb. Cassini arrived at Saturn in 2004, and staged hundreds of passes by Enceladus, Titan, and some of the other moons. [NASA/JPL/SSI]

The end is near for the Cassini spacecraft. After 13 years of exploring Saturn and its moons and rings, the craft will end its mission tomorrow with a fatal plunge into Saturn’s atmosphere.

Cassini arrived at Saturn in the summer of 2004. Since then, it’s orbited the planet almost 300 times. It’s discovered lightning crackling inside giant storms, found lakes of liquid methane and ethane on the big moon Titan, and seen geysers of water and ice erupting from the moon Enceladus.

But it’s about out of propellants for its rocket engine, so engineers won’t be able to control where it’s going. Scientists don’t want it to crash into Titan or Enceladus, though, because the moons are considered possible homes for life. No one wants want to run the risk — however minuscule — that Cassini could carry microbes from Earth that could contaminate those worlds.

So for the last few months, Cassini has been setting up for its demise. It’s been following a path that carried it especially close to Saturn — between its clouds and the inner edge of its rings.

And tomorrow, its final orbit will carry it into Saturn’s atmosphere. Cassini will transmit its observations for as long as possible. Eventually, though, the plunge will rip the craft apart. And its remains will burn up, forming bright meteors in Saturn’s sky.

That will end one of the most impressive space missions in history — a grand tour of Saturn and its entourage of moons and rings.