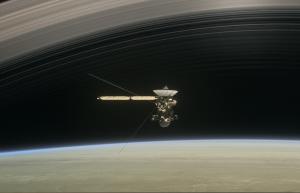 This artist's concept shows the Cassini spacecraft passing between Saturn and its rings in preparation for its final act: a fatal plunge into Saturn's atmosphere, scheduled for September 15. The craft has been orbiting Saturn since 2004, and has made important discoveries about the planet, its rings, and its more than 60 known moons. Cassini will transmit its final pictures to Earth on September 14, but it will relay other data as it enters the atmosphere. [NASA/JPL]

Lakes and seas filled with liquid hydrocarbons dot the surface of Titan, the largest moon of Saturn. Geysers of water squirt from the south pole of a smaller moon, Enceladus. And lightning sometimes crackles through the clouds of Saturn itself.

Those are among the many discoveries made by Cassini, a spacecraft that entered orbit around Saturn more than 13 years ago. When it arrived, Saturn was like a neighbor you’ve never met — you see them in the front yard or on the street, but you don’t know much about them. But Cassini gave us quite an introduction — it turned that giant but distant neighbor into a well-known friend.

Cassini watched as small moons created waves in Saturn’s rings, like the wake of a boat speeding across a still lake. In 2011, it kept an eye on a giant storm that eventually spread all the way around Saturn’s northern hemisphere. And it discovered a ridge on Iapetus that makes the moon look a bit like a walnut.

Cassini also dropped a robotic probe into the cold, dense atmosphere of Titan. The atmosphere is topped by an orange haze, so Titan’s surface had been hidden from view. The probe photographed dry river channels and flat pebbles of ice on the surface. And Cassini itself used radar and other instruments to map the surface, revealing not only the lakes and seas, but giant dunes, an ice volcano, and many other amazing features.

Cassini’s time is up, though, and we’ll talk about its final act tomorrow.