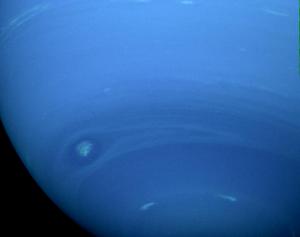 Giant Neptune is the bluest planet in the solar system, as shown in this 1989 view from the Voyager 2 spacecraft. Methane in the upper atmosphere, along with unknown chemical compounds, absorb red light, making the planet look blue. [NASA/JPL]

Earth is sometimes called the blue planet, for an obvious reason: most of its surface is covered by water. Earth is really a distant second in the “blue” category, though. At the top of the list is Neptune, the most remote of the Sun’s major planets. The entire planet is blue — and scientists aren’t entirely sure why.

Neptune is one of the giants of the solar system. It’s about four times Earth’s diameter, and about 17 times its mass. It probably has a rocky core surrounded by slushy layers of ices. And those layers are surrounded by an atmosphere of hydrogen and helium gas, which is topped by clouds. The clouds are made of ammonia, water, and other compounds.

One of those compounds is methane, and it’s partially responsible for Neptune’s color, because it absorbs red wavelengths of light.

There’s also a lot of methane in the atmosphere of the planet Uranus. But that world has a greener tint than Neptune does. So some other chemical must be making Neptune look even bluer. And so far, scientists haven’t identified that extra ingredient, so they aren’t sure what makes Neptune the bluest planet in the solar system.

Neptune is putting on its best showing of the year right now. It rises at sunset, is in the sky all night, and shines brightest for the year. Even so, it’s so faint that you need a telescope to see it. And the bright Moon is close by tonight, making it even tougher to find this beautiful planet.