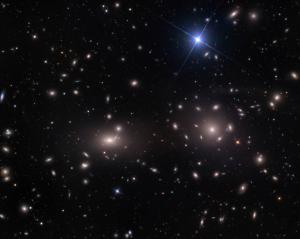 Thousands of galaxies make up the Coma Cluster, one of the largest and most massive clusters in the universe. This view shows hundreds of those galaxies, including the two most massive--a pair of giant elliptical galaxies just left and right of center. These galaxies contain a trillion or more stars, which spread across a million light-years. [Adam Block/Mount Lemmon SkyCenter/Univ. Arizona]

The Coma galaxy cluster is one of the biggest and brightest around. It contains thousands of galaxies, including quite a few that are far more impressive than our own galaxy, the Milky Way. Even so, most of what makes up the cluster is invisible.

The cluster is in the constellation Coma Berenices, which is in the east at nightfall. It’s well above brilliant Arcturus, which is low above the horizon. You need a telescope, though, to see the galaxies.

So far, no telescope can show us the bulk of the cluster’s mass. That’s because it consists of dark matter. This form of matter produces no detectable energy, but reveals itself through its gravitational pull on the visible matter around it. In fact, dark matter was discovered through its influence on the Coma galaxies.

In 1933, astronomer Fritz Zwicky measured the motions of the cluster’s galaxies. He found that all the visible galaxies couldn’t account for those motions — something else was tugging at them. He called it “dark matter” — but it took decades for other astronomers to accept his discovery.

Today, we know that dark matter accounts for about 85 percent of all the matter in the universe. Even now, though, its true nature is unknown. It’s probably a type of particle that interacts with normal matter only through gravity. But no one has yet seen such a particle — leaving our knowledge of the bright Coma cluster a bit in the dark.

More about dark matter and the Coma cluster tomorrow.