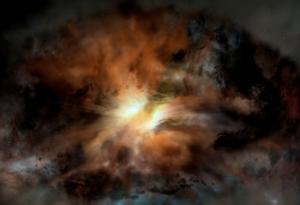 An artist's concept shows the busy heart of WISE 2246, a galaxy that is blowing itself apart. A super-hot disk of gas around a supermassive hole at the galaxy's center emits so much radiation that it is blowing away the gas, dust, and stars in the surrounding galaxy. This illustration shows the glow of the disk around the black hole at center, surrounded by billowing clouds of gas and dust. [NRAO/AUI/NSF; Dana Berry/SkyWorks; ALMA (ESO/NAOJ/NRAO)]

If you place a pot of water on the stove, turn the burner on full blast, then leave it, the water will eventually boil away.

Something similar seems to be happening in the core of a distant galaxy. The heat is turned up so high that the surrounding gas is boiling off into space — blowing the galaxy to bits.

The galaxy — WISE 2246 for short — is more than 12 billion light-years away. That means we see it as it looked when the universe was about one-tenth its current age.

A supermassive black hole inhabits the galaxy’s core. Its powerful gravity pulls in vast amounts of gas, dust, and stars. This material forms a rotating disk around the black hole. Friction in the disk heats it to millions of degrees, so it produces enormous amounts of energy. This energy pushes back at surrounding material that’s falling toward the black hole.

And that’s what’s happening in WISE 2246. The energy from the disk around the black hole is pushing all of the galaxy’s gas and dust out into space — ripping the galaxy apart.

This activity warms vast clouds of dust, causing them to glow brightly at infrared wavelengths — which is how the galaxy was discovered. The combination of this energy, plus that from the disk around the black hole, help make WISE 2246 the most energetic galaxy yet seen. It emits about 350 trillion times as much energy as the Sun — and thousands of times more than all the stars in the Milky Way galaxy combined.