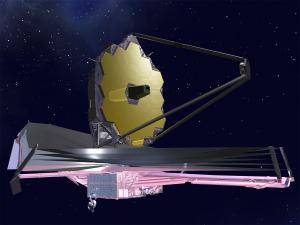 James Webb Space Telescope, shown here in an artist's concept, is taking shape this year. Its primary mirror, which consists of 18 hexagonal beryllium segments, was completed in February, and its secondary mirror was installed in March. The telescope is scheduled for launch in 2018. [NASA]

When Hubble Space Telescope took its deepest look into the universe, it saw galaxies galore — big and small, near and far, young and old. Even with Hubble’s vision, though, the farthest galaxies of all were nothing more than tiny red dots — smudges of light from the newborn universe.

Astronomers are eager to study those smudges in detail, though, because they can reveal how the first stars were born and how they died, and how the galaxies themselves came together.

A tool for studying those galaxies is nearing completion — the James Webb Space Telescope. It’s undergoing final assembly this year, with testing next year and launch scheduled for 2018.

It’ll be the largest space telescope ever launched. Its main mirror will be as tall as a two-story building. The mirror will consist of 18 segments that’ll be folded up for launch. The segments are coated with gold — a substance that’s good at reflecting the wavelengths of light that Webb is designed to study: the infrared.

The first galaxies are so far away that their light has been stretched by the expansion of the universe. So what started out as visible light has been shifted to longer, infrared wavelengths.

Hubble is sensitive to some infrared wavelengths, but James Webb will see them all. Combined with its greater size and some new instruments, that’ll give astronomers their best view yet at the first galaxies in the universe.