Assault on a Comet 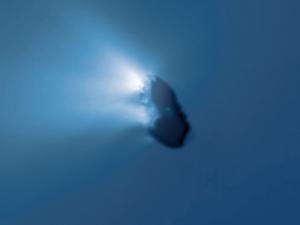 Assault on a Comet

A fleet of spacecraft took aim at Halley's Comet in 1986, providing the first close-up look at any comet. The best views came from Giotto, a European craft, which snapped this picture (which has been color-enhanced) just a few minutes before its closest encounter. It shows streams of gas and dust flowing away from the comet, pushed by sunlight and the solar wind. [ESA]

Encounters with comets are fairly common these days. Several spacecraft have flown near them, and a European craft has been orbiting one for almost a year and a half.

The first encounter with a comet was an all-out assault. Five probes flew past the comet over a period of a week or so. The first one made its closest approach 30 years ago tomorrow.

Comet Halley was flying through the inner solar system. It’s probably the most famous comet of all. It’s been immortalized in works of art, and it’s inspired fear during many of its encounters.

Among scientists, though, the comet inspired great excitement. And its passage near Earth presented a great opportunity to examine a comet up close.

So several space agencies launched missions to study it. The first to reach the comet was Vega 1, the first of two Soviet craft.

Vega had dropped off a probe to study Venus. Then, on March 6th, 1986, it flew through Halley’s tail, about 6,000 miles from the comet’s nucleus. Vega 2 followed the next day, with twin Japanese craft right behind.

The champ of the Halley fleet was the European mission, Giotto. It flew just a few hundred miles from the nucleus, where it was pelted by grains of comet dust. It snapped pictures of the nucleus, and measured the composition of the gas and dust streaming from its surface.

The combined fleet provided the most detailed look at a comet to that time — the first encounters with an icy visitor from deep space.

Assault on a Comet | StarDate Online