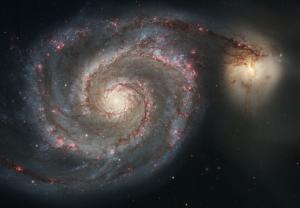 M51 whirls through space in this Hubble Space Telescope image. The galaxy, also known as the Whirlpool, is similar to our home galaxy, the Milky Way. The gravity of a small companion galaxy, at right, may have caused waves in the Whirlpool that created its spiral arms. Bright blobs within the spiral arms are stellar nurseries, giving birth to many new stars. [NASA/ESA]

One of the most beautiful spiral galaxies spins high across the north tonight. It’s known as M51 — the Whirlpool. It has nearly perfect spiral arms, punctuated by bright stellar nurseries. And the cause of both stands at the end of one of those arms — a smaller galaxy that appears to have stirred up its bigger companion.

The Whirlpool is about 25 million to 30 million light-years away. It’s a little smaller than our own galaxy, the Milky Way.

Its companion looks like a fuzzy blob. It probably flew past M51, creating waves within the bigger galaxy’s disk. The waves spin around the galactic center, creating the spiral arms.

Although they’re brighter than their surroundings, the arms don’t really contain any more stuff than the rest of the galaxy. Instead, the waves that create the arms compress clouds of gas and dust, causing them to give birth to new stars. Many of these stars are hot and bright, so they make the spiral arms look bright.

These bright young stars don’t last long, though — they explode after a few million years. In fact, three stellar explosions have been seen over the last couple of decades — compared to none in the bigger Milky Way. Even as they die, though, these stars are replaced by new ones — the progeny of a galactic encounter.

M51 stands close to the end of the handle of the Big Dipper, which is low in the northeast in early evening and wheels high overhead later on.