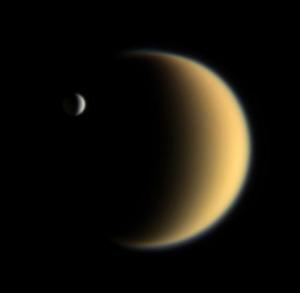 Saturn's giant moon Titan and a smaller moon, Enceladus (left), appear to have all the ingredients for life, including liquid water, a heat source, and organic chemistry. Titan is covered with lakes and seas filled with methane, ethane, and other organic compounds, while jets of water and ice squirt from deep below the icy crust of Enceladus. So far, there is no direct evidence of life, only the ingredients for life. This image was snapped by the Cassini spacecraft, which has been orbiting Saturn since 2004. [NASA/JPL/SSI]

In all the universe, we know of exactly one world with life: our own planet Earth. Yet we’re finding more and more possible homes for life all the time. Many of them are planets in other solar systems. But some of them are right here in our own solar system. In fact, two of them orbit the planet Saturn, which huddles near the Moon late tonight.

Enceladus and Titan are among Saturn’s most intriguing moons. Both appear to have all the ingredients for life.

Enceladus, for example, has a possible ocean of liquid water beneath its icy crust. The water stays liquid because the moon’s interior is heated by Saturn’s gravitational pull. And it contains chemical elements that are important for life. So this cold little moon has everything needed for life as we know it: water, energy, and the right chemistry.

Titan is much bigger, but it has those same ingredients. It may have a subsurface ocean that contains far more water than all the oceans on Earth. Its surface is awash in organic compounds — the chemistry of life. And like Enceladus, its ocean is kept warm by the heat generated by Saturn’s pull.

Of course, no one has spotted life on these moons or anywhere else. And we don’t know if life would form on other worlds even under the best of conditions. All we know is that the conditions for life can be found right here in own solar system.

Look for Saturn close to the right of our moon at first light tomorrow. It looks like a bright golden star.

Saturn at Its Best