Partial lunar eclipse
Earth’s shadow covers only part of the lunar disk, so it looks as though something has taken a bite out of it.

Total solar eclipse
The Moon passes between Earth and Sun, completely covering the Sun’s disk along a narrow path.

Partial solar eclipse
The Moon covers only part of the Sun, so the Sun remains visible. Depending on how much of the Sun is obscured, the sky may turn dusky and temperatures may drop.

Annular solar eclipse
The Moon is a bit farther from Earth than average, so a ring of sunlight encircles the Moon as it passes between Earth and Sun.

What is the difference between a lunar and a solar eclipse? 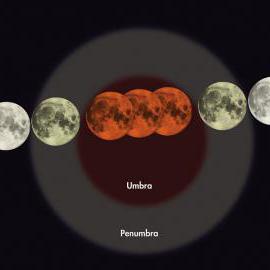 This illustration shows the Moon passing through Earth's shadow during a typical lunar eclipse. The Moon is slightly tinted when it passes through the light outer portion of the shadow, the penumbra, but turns dark red as it passes through the central portion of the shadow, called the umbra. [Tim Jones] From our perspective on Earth, two types of eclipses occur: lunar, the blocking of the Moon by Earth's shadow, and solar, the obstruction of the Sun by the Moon.

The Moon casts its shadow on Earth's surface during a total solar eclipse. [Tim Jones]

More about
Eclipses, Occultations and Transits