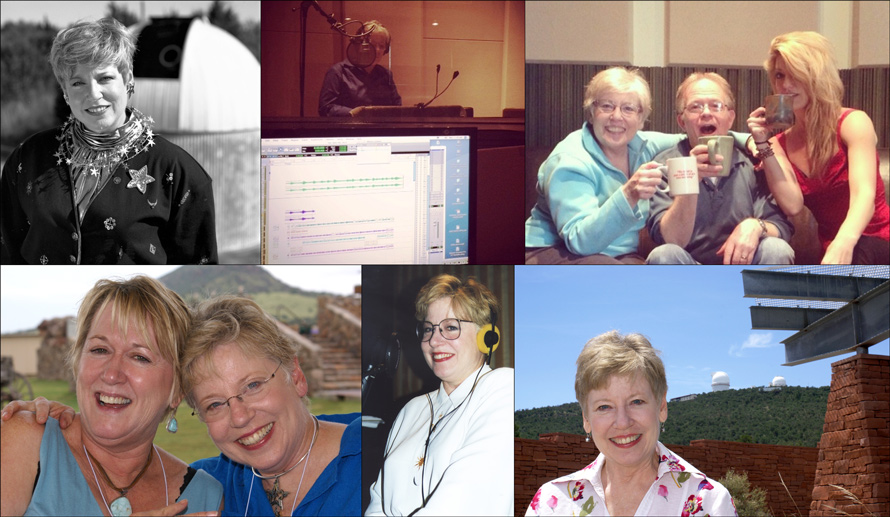 28 Years of Sandy Wood (clockwise from top left): Shortly after her selection as StarDate announcer, 1991; in the studio, 2013; with producer Damond Benningfield and engineer Shayna Brown, 2014; at McDonald Observatory; in the studio, late 1990s; with long-time executive producer Sandra Preston in West Texas.

A Farewell Message from Sandy Wood

When Sandy Wood auditioned for the role of StarDate announcer in 1991, there was little doubt that she was the best person for the job. She had a great voice, she took direction well, and she was professional throughout the process.

What I remember most, though, is what happened after the audition. She and her husband and son were heading out for a vacation a day or two later. When I told Sandy that the audition was done, she yelled out, “All right! I’m outta here! I’m going to the Bahamas!” That enthusiasm and lack of self-consciousness convinced me that she was not just the right voice for StarDate, she was the right person.

Fortunately for StarDate and its fans, Sandy returned from the Bahamas a couple of weeks later to start the gig she has held for the last 28 years. She has maintained her enthusiasm for the show and its fans throughout that time, and has taken great pride in her work — all while not taking herself too seriously.

Unfortunately, though, life sometimes throws serious obstacles in our way. In Sandy’s case, health problems have forced her to resign from the program. Her last episode will air July 16.

“Since 1991 I’ve been with you every day, telling you about the wonders of the universe,” Sandy said at the end of that program. “Recent health problems, though, have left me unable to continue, so this is my final episode. My thanks for all of the support from our Star Date audience — the best in the universe!”

Sandy’s first eposide, which we recorded on May 23, 1991, aired on September 16 of that year. She took over for the show’s original voice, Joel Block, when he left to start the Earth and Sky radio program with Deborah Byrd, the original writer and producer.

Sandy has recorded a total of 10,166 episodes of the program. She’s also served as the voice of McDonald Observatory in several videos at the Observatory’s visitor facilities in Fort Davis, and has recorded several longer podcasts for McDonald projects as well.

She has enlivened every single recording session during her tenure — almost 700 of them by my count. She’s funny, kind, warm, and a complete hoot. She’s one of the best people I’ve ever had the privilege to know, and I have always looked forward to seeing her at our sessions.

Over the years, I’ve seen many emails, letters, and other messages from listeners who compliment Sandy on her voice and her friendliness. Several of them have said that they could listen to her reading grocery lists or telephone books. And many have said they couldn’t make it through the day without hearing her warm, familiar voice on the radio.

To those folks — and I include myself on that list — I offer my sincere condolences. We will press on with StarDate. In fact, we’ve hired a great new voice talent who has many of the same qualities as Sandy. We’ll continue to bring you skywatching tips, news about the universe, and many other bon mots. And we’ll work hard to maintain your trust and loyalty. But, believe me, I understand this better than anyone: It’ll never be quite the same.

So on behalf of everyone at StarDate, I wish Sandy all the best in her retirement. Feel well, love your family, and think of us often. And when you have the chance, head for the Bahamas!