The universe began with a fiery Big Bang. Matter and energy interacted with gravity and other fundamental forces to form the earliest structures. Over billions of years, the building blocks of the cosmos -- galaxies, galaxy clusters, giant walls, and voids -- have evolved. The study of that evolution may allow us to predict what the future will bring. 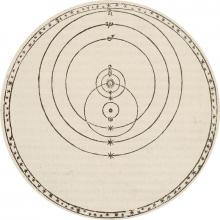 Cosmology deals with one of mankind's earliest questions: what is the nature of the world? Ancient civilizations believed that Earth was flat, and covered with a spherical dome on which the Sun, Moon, planets, and stars resided. In the second century A.D., the Ptolemaic system moved Earth to the universe's center. In the mid 1500s, the Copernican system placed the Sun at the universe's center.

Later, Galileo Galilei showed that the Milky Way is made of millions of stars. He argued that the Sun is itself a star, no different than the others. The Milky Way is now known to be a system composed of hundreds of billions of stars, organized in the shape of a flattened disk with a diameter of about 100,000 light-years. Our Sun is about 27,000 light-years from its center.

Until the early twentieth century, astronomers thought the Milky Way was the sole constituent of the universe. Then they discovered that the spiral nebulae -- fuzzy objects found all over the night sky -- are large systems of stars.

Among the nebulae, they found a few special stars called "Cepheid variables," whose brightnesses regularly increase and decrease every few days. By comparing how much light these stars actually give off to how bright they appear from Earth, astronomers measured their distances. It was a stunning discovery: The nebulae containing these stars were at least one million light-years away, far beyond the edge of the Milky Way. The universe was much larger than originally thought.

In our modern picture, the nebulae are called galaxies, and there are at least 100 billion of them in the universe. The Milky Way is a galaxy just like these others.

In 1929, Edwin Hubble discovered that the galaxies are in motion. With few exceptions, all galaxies are moving away from the Milky Way. Furthermore, the farther any galaxy is from us, the faster it's moving.

This implies that the galaxies are moving not only away from us, but also from each other. The universe is not static, but evolving. It expands. Expansion implies that the galaxies were closer to one another in the past. The farther back we go, the closer together they were, until a time when they were all at the same place. This leads to the idea that the universe was created by a primordial explosion, or "Big Bang," which occurred 13 billion to 14 billion years ago. The galaxies today are moving away from each other because the universe itself is expanding.

With this discovery, cosmology acquires a new meaning. It is no longer concerned solely with the nature of the universe, but with its evolution as well.

What is the universe made of?

The visible matter in the universe that makes up the familiar structures of the galaxies -- is composed in approximately the following manner:

While the process of nuclear fusion has very slightly increased the quantities of helium -- and produced almost all of the other elements present -- these figures are practically unchanged since the earliest years of our universe.

The vast majority of the material in the universe -- perhaps as much as 90 percent -- is not visible. This so-called "dark matter" reveals itself only through its gravitational effect on other objects, such as galaxies in large clusters. Astronomers, faced with the complete mystery of such an enormous fraction of the universe's constituent material, have proposed a number of unusual possibilities, from weakly interacting massive particles (WIMPs) such as neutrinos, to massive compact halo objects (MACHOs) such as brown dwarfs. Results from studies of these options remain inconclusive, however, and the true nature of "dark matter" -- and what most of the universe is made of -- remains a question.