The second planet from the Sun in the solar system. Venus orbits the Sun at an average distance 0.7 AU. The planet has a mass of 0.08 times the mass of Earth and a radius 0.95 times the radius of Earth. It is made of solid, rocky material and has a predominantly carbon dioxide atmosphere. Clouds of sulfuric acid cover the entire planet. Venus has no moons. 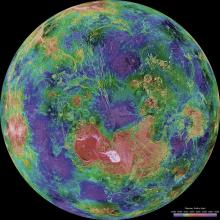 Volcanoes on our closest neighbors February 18, 2022

The complicated hunt for life October 4, 2021

The first landing on another planet December 15, 2020