Ursa Major — the great bear — is always above the horizon in the northern latitudes, but the best time to see it is in the spring when its high above the northeastern horizon. Ursa Major is best known as the home of the Big Dipper. 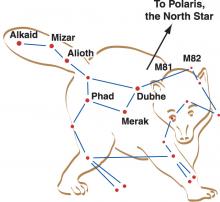 Of all the star patterns in the sky, the Big Dipper is the most universally recognized. The dipper's seven bright stars form a portion of the great bear. It's hard to see the rest of the bear, especially from light-polluted cities.

After you locate the dipper, look at the two stars that mark the outer edge of its bowl. Now connect these two stars, then extend the line above the dipper's bowl. Polaris, the north star, lies along this line, about five times the distance between the two pointers. No matter where the Big Dipper is in our sky, those two stars always point to Polaris. 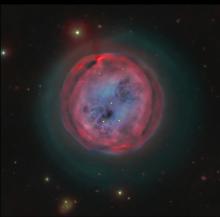