Galaxies can be classified in several ways. The most common is a system developed by Edwin Hubble, which is based on the shapes of galaxies. 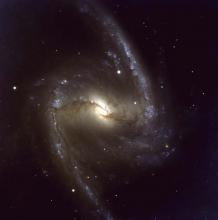 The most beautiful galaxies are called spirals. The Milky Way is a spiral, and so is the Andromeda galaxy (M31).

Spirals are flat disks of stars with bright bulges in their centers. Spiral arms wrap around these bulges. Spiral arms probably form as the result of waves that sweep through the galactic disk. Like the waves on the ocean, these "density waves" don't carry material with them. Instead, they influence matter as they pass by. In the case of galaxies, they squeeze clouds of interstellar gas, triggering new star formation. Some newborn stars are massive, hot, and bright, so they make the spiral arms appear bright. These massive stars are blue or white, so the spiral arms look blue-white, too. The gaps between the arms contain older stars, which are not as bright.

In some spirals, a wave organizes the stars in the center into a bar. The arms of barred galaxies spiral outward from the ends of the bar. The Milky Way falls into this class of spirals.

A second class of galaxy is the ellipticals. Like spirals, they are named for their shapes: they look like fat, fuzzy footballs. Instead of spreading out into a thin disk, as they do in spirals, the stars in ellipticals wrap completely around the galaxy's heart in all directions.

The largest galaxies in the universe are giant ellipticals. They can contain a trillion stars or more, and span as much as one million light-years -- about 10 times the diameter of the Milky Way. Like many large spirals, most of them appear to contain "supermassive" black holes at their hearts -- star-gobbling monsters that are as much as three billion times as massive as the Sun.

The final class of galaxies contains a hodge-podge of shapes -- anything that looks neither spiral nor elliptical. These are the irregulars. These galaxies have no identifiable form. Their stars, gas, and dust spread randomly. These are the smallest galaxies, and may contain as few as one million stars. They may be like the "building blocks" that came together to form the first large galaxies. Many small irregular galaxies orbit the Milky Way.

Astronomers also categorize galaxies by how much energy they produce in their cores. A particular class is called "active" galaxies, because they produce much more energy than "normal" galaxies.

The most powerful active galaxies are quasars. They are among the brightest and most distant objects in the universe. A quasar may emit more energy than an entire galaxy of stars from a region no bigger than our own solar system. Astronomers believe these objects contain supermassive black holes at their hearts, which are encircled by disks of gas. A black hole is an object that is squeezed together so tightly that it has extremely strong gravity. Its gravity is so powerful that nothing can escape from it -- not even light. As gas spirals toward the black hole, it is heated to billions of degrees, so it emits enormous amounts of energy, and the quasar shines brightly.