A stretching force that is caused by the difference between gravitational forces on opposite sides of an object, such as a planet or moon. For example, because the Moon pulls on opposite sides of the Earth with different strengths, water on the Earth is pulled either toward or away from the Moon, resulting in the ocean tides. Elsewhere in the Solar System, the magnitude of gravitational force on Jupiter’s moon Io is greatest on the side of Io that faces Jupiter and least on the back side. The difference between the two forces compresses and stretches Io, which in turn heats up Io’s interior. As a result, Io is the most geologically active body in the solar system. 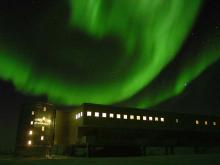