Astronomy may be within a decade or so of helping to answer one of the most intriguing questions in science: Does life exist elsewhere in the universe? Besides searching for life in our solar system and attempting to detect signals from other civilizations, astronomers are looking for planets that seem conducive to life and trying to detect signs of life in the light we receive from them. 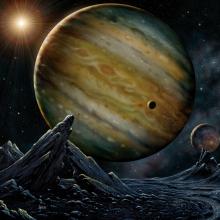 The discovery of many giant planets orbiting other stars shows us that planets -- at least Jupiter-like planets -- probably are common. There is little chance of life on such planets, though. To find life, astronomers are trying to detect small, rocky planets similar to Earth. This lies beyond current abilities, although it may not be far off.

Most of today's planet-finding methods detect the effects of planets on the motion or light of the stars they orbit; they cannot "see" a planet directly. To find the signatures of life, astronomers must take pictures of and analyze the light from the planets themselves. But Earth-like planets around other stars are small and faint, so direct imaging will require large space telescopes that can block the light from the parent star.

No one has come up with a complete definition of "life," but astrobiologists (the scientists who study the possibility of life beyond Earth) are narrowing the search to the type of life that's most familiar to us -- "life as we know it." 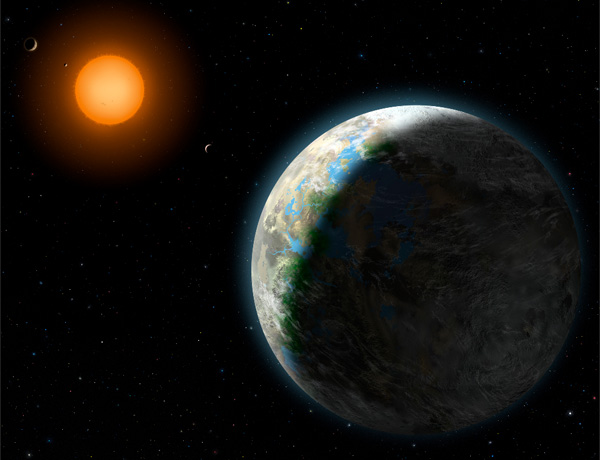 Artist's concept of an Earth-like world orbiting an alien starThis type of life requires complex carbon-based compounds that interact in liquid water. Carbon is unrivaled in its ability to form strong bonds, and in its ability to form the complex molecules that can store and transfer enormous amounts of information -- one of the hallmarks of life. Liquid water is unique in many of its properties and in the diverse functions that it can carry out efficiently. Carbon and the hydrogen and oxygen that make up water are abundant in the universe. Water and complex carbon molecules have been detected in the harsh environment of space, so we know they form easily.

Liquid water can exist only within a narrow range of temperatures. The temperature of a planet is determined mostly by its distance from its star, so there is a narrow range of distances, called the "habitable zone," where astronomers expect to find such liquid-water-bearing planets. The detection of water vapor in a planet's atmosphere would provide strong evidence that the planet's temperature is "just right" for life. Carbon dioxide also is a good indicator that a planet is suitable for life. 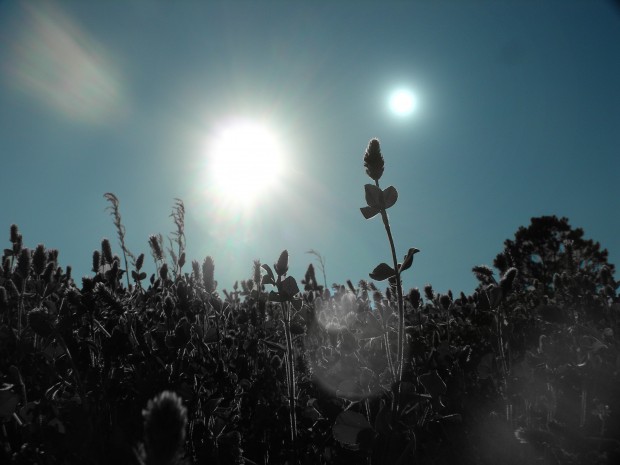 Artist's concept of plant life on a planet with two stars in its skyBut these are signs that a planet is conducive to life, not that any organisms actually live there. What would be a real biosignature? Many scientists think that abundant molecular oxygen, or its product, ozone, is a strong one because on Earth molecular oxygen is produced mostly by the photosynthesis of plants. The simultaneous detection of water, carbon dioxide, and oxygen or ozone would be a strong indicator that biological processes are occurring on a planet.

Also, the detection of large amounts of oxygen and a gas like methane or nitrous oxide would be a strong signature, because on Earth these gases are produced almost entirely by biological processes. Methane will be a prime target for future space-based exoplanet searches, but it might be difficult to detect. However, researchers recently discovered that these biosignatures, as well as that of methyl chloride -- a compound that on Earth is produced almost entirely by living organisms -- could be far stronger on Earth-like planets orbiting the small, cool stars known as red dwarfs. This could make such stars prime targets for observations.

The surface of a planet also holds a wealth of information. Certain properties of light reflected from green plants could provide a good biosignature. A related approach uses the different percentages of light that is reflected by oceans, deserts, vegetation, clouds, and ice. Variations in how much light a planet reflects as it rotates could reveal large oceans, surface ice, or even forests on Earth-like planets.

None of these biosignatures is clear-cut, and any of them could be produced by processes other than life. Taken together, however, they form a suite of tests that can suggest whether Earth-like planets harbor Earth-like life.

In 1992, NASA launched a search for extraterrestrial intelligence — an effort to detect radio waves from other civilizations. The project lasted only a few months, but it soon rose from the ashes — this time sponsored by the privately funded SETI Institute. 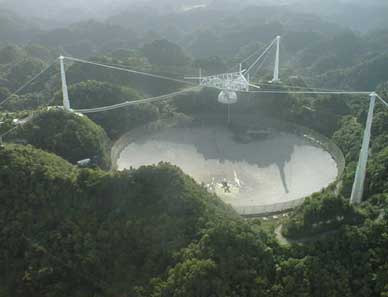 Project Phoenix scanned its first star in 1994. It started at a radio telescope in Australia, then moved to West Virginia, and finally to the world’s largest single-dish radio telescope, in Puerto Rico. In all, Phoenix scanned about 800 stars within 250 light-years of Earth. All the target stars were considered relatively hospitable systems for life. The stars are the right type and age, and many of them have confirmed planets. One sentimental target was Altair, which is about 17 light-years away in the constellation Aquila, the eagle. The star was the setting for Forbidden Planet, a popular 1950s movie in which explorers from Earth find the fantastic remains of a dead civilization.

The Phoenix receivers scanned millions of radio frequencies, hoping to find either a steady signal or one that repeated at regular intervals. The detectors were sensitive enough to pick up any signal as powerful as a military radar here on Earth. Interesting signals were followed up with additional observations.

None of the interesting signals panned out. But scientists hope to conduct more-sensitive searches in the future.