Sagittarius, the archer, slides low across the southern sky of summer. Sagittarius is a centaur — a mythological half-man, half-horse — who has drawn his bow. His arrow is pointing at Antares, the bright red heart of Scorpius, the scorpion. The archer is avenging Orion, who was slain by the scorpion's sting. 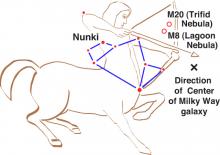 The constellation originated in Sumeria, then was picked up by the Greeks. But they appear to have missed something in the translation. The original story may have described a satyr, which was part man and part goat. One of these creatures was credited with inventing archery, which was why he was depicted in the sky with a bow and arrow. The Greeks kept the bow and arrow, but changed the creature.

To most modern eyes, though, the brightest stars of Sagittarius appear to outline not a mythological creature but a teapot. Steam pours from the spout — the hazy starclouds of the Milky Way.

The center of the Milky Way galaxy is immersed in that steam, about 27,000 light-years away. Although the galaxy's core is packed with stars, interstellar dust between the core and Earth absorbs most of its light, rendering it invisible except to instruments that study wavelengths of light that penetrate the dust.

One part of the classical picture that is fairly easy to see is the bow. The star that represents the top of the bow is at the top of the teapot, with the bottom of the bow at the bottom right of the teapot. A star that is about halfway between them represents the middle of the bow. The stars are named Kaus Borealis, Kaus Media, and Kaus Australis, which is a combination of Arabic and Latin that means the northern, middle, and southern bow.

Kaus Australis -- the southern end of the bow -- is the brightest star in the constellation. It is a stellar giant -- a star that has puffed up as it nears the end of its life. It's many times larger than the Sun, and almost 400 times brighter. That makes it quite easy to see even though it's about 145 light-years away. The bow's other stars are giants, too. The one in the middle is actually the most impressive of the lot -- it's bigger and brighter than the others, but farther away. 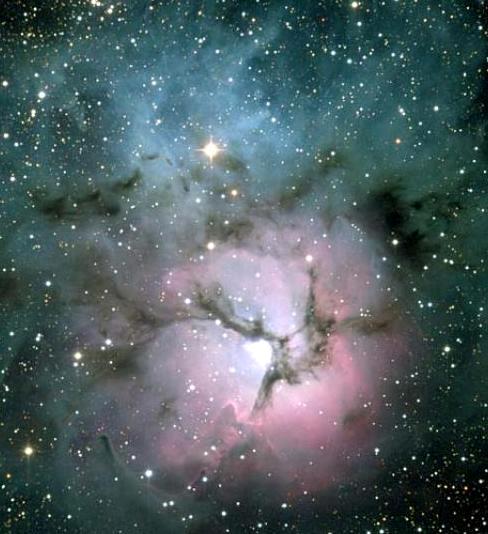 The steam above the spout includes two nebulae that are giving birth to new star clusters: M8 (the Lagoon Nebula) and M20 (the Trifid Nebula).

The Lagoon has given birth to scores of stars, with more taking shape even now. Through binoculars or a small telescope, it looks like a hazy oval of light. Photographs show a reddish-pink glow, which is the color of hydrogen atoms being zapped by the radiation of young stars.

Lanes of dark dust across the face of M20 give it a three-part appearance. A young star at the center of the nebula, which lights up much of the material around it, is triggering the formation of more than a hundred other stars.