A particular type of active galaxy that emits more light at radio wavelengths than at visible wavelengths, also known as a radio-luminous galaxy or radio-loud galaxy. Radio galaxies are driven by non-thermal emission. Radio telescopes show that some radio galaxies, called extended radio galaxies, have lobes of radio emission extending millions of light-years from their nuclei. Centaurus A is a nearby example of an extended radio galaxy that features two outer lobes 650,000 and 1,350,000 light-years in diameter. In contrast, compact radio galaxies emit radio lobes not much larger than the galactic nucleus. 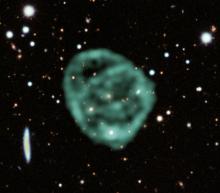 Powering up some distant galaxies February 7, 2022